Were you ever a cub scout or girl guide? Growing up, I had a friend who was. By the time we were teenagers she had acquired such a skill set, she could MacGyver her way out of any situation. With each newly mastered skill she received a badge, but little did she know of the the scouts shady beginnings. 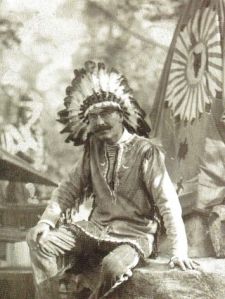 Back in the early 1900′s, Ernest Thompson Seton owned a lot of land in the town of Greenwich, Connecticut. The local youth were not happy when he decided to fence off his vast hunting grounds (thus keeping all the wild game to himself). They retaliated by vandalizing his property. In the old ways of turning the other cheek, Sir Seton invited this local riff raff over for a weekend campout on his property. Two days, many toasted marsh mellows and Indian lore later, the boys grew fond of Sir Seton, so much so that they nick named him “Black Wolf.” These were the beginnings of ‘The League of Woodcraft Indians’ and eventually ‘The Boy Scouts of America.’

Much like my childhood friend and her treasure trove of badges, Indian tribes had their own system of badges. Their badges were feathers which were earned -acts of bravery. Each feather had special meaning. Once an Indian had accrued a good set of feathers, they would be made into a headdress to be worn with pride. 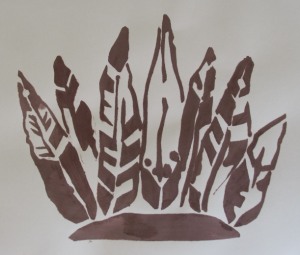 The kids colouring them in. 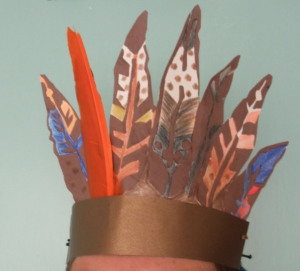