Instructions on the back read “Ideal para Queso”…. ideal for cheese. Yes, remarkable, doodling on cheese, so why not on marshmallows, which is what we did and will do often over the school holidays. Daughter has this thing for fruit sticks: skewers pierced through 1 part fruit: 10 part marshmallow. A bit light on the fruit, nonetheless, after a long day when a little persuasion is required… 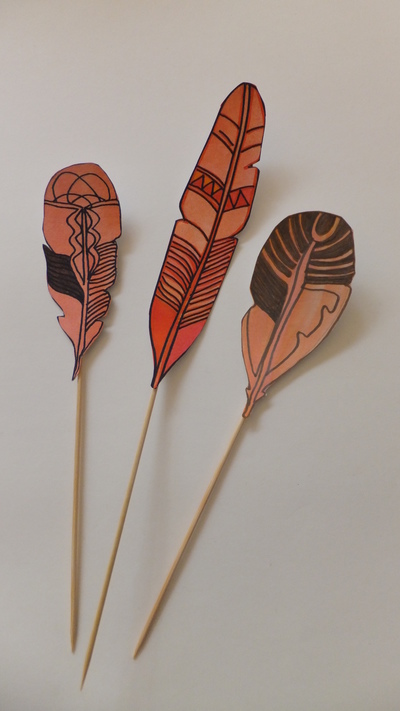 The girls and the fruits and mallows of their efforts 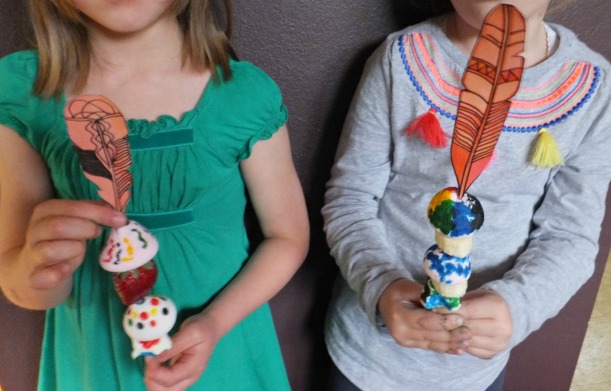 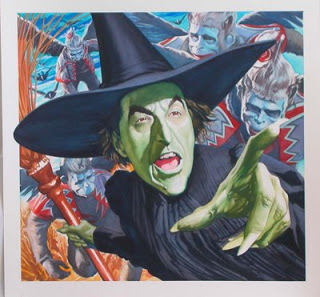 With face of blue and silver fur, the flying monkeys of the 1939 The Wizard of Oz film copped a bad wrap. With no back story we assume these miscreant feathered mammals are bad to the bone. Alas they are enslaved to do three times the bidding of the owner of the golden cap. Whilst in the hands of the Wicked Witch of the West, she bids them do her dirty work.

Flying monkeys on foam, stencilled and cut out

Curiosity killed the cat… some of the time.

Back in 1935, there was a widely accepted theory amongst physicists when it came to teeny, tiny things not visible to the eye. They agreed that since you can’t see them, it’s possible they could be in state x or state y, so let’s say they’re both, in two states at the one time (the Copenhagen interpretation of Quantum mechanics).

An Austrian physicist called Erwin Schrodinger thought this to be reductio ad absurdum (absolutely whack). He put the theory to life size terms to illustrate his point, this became known as Schrodinger’s cat. The thought experiment goes; What happens when you put a cat in a box with a vial of poison and a trigger. How does kitty fare?

According to the accepted thought at the time, since you can’t see the cat, either possibility is valid, cat is both dead AND alive. When you open the lid reality collapses to one possibility or the other. Until that moment, it’s undead kitty.

This led to all sorts of other theories about parallel possible realities… but that’s another story altogether! 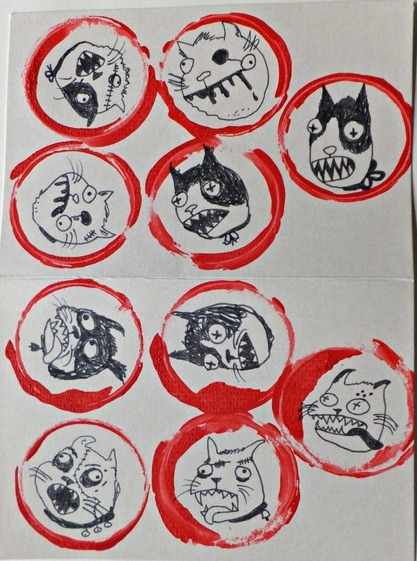 For more of my Halloween crafts –

The greatest thing you’ll ever learn is just to love and be loved in return. Nat King Cole crooned this pearl of wisdom back in 1948 and it still rings true. For those of us who have the daily joy of parenting, there are moments where you don’t feel the love in return…

My crime…turn off Frozen and get ready for bed NOW! This lovely piece is blu tac’d to daughters bedroom door. Time to go tantrum art!

Pick a photo of your beloved. Photocopy and enlarge in B & W.

Lightly tape your photocopy (picture facing down) onto your canvas board. Wear disposable gloves and head outdoors. Dip your blender pen into turps and rub pen tip in small wax on, wax off circles on the back of the paper on the parts where you’d like the image to transfer. It starts to look translucent.

The image transferred over a little faint. Xylene makes for a stronger image transfer, but is a more hazardous solvent to work with. Citra-Sol is apparently a safer alternative. 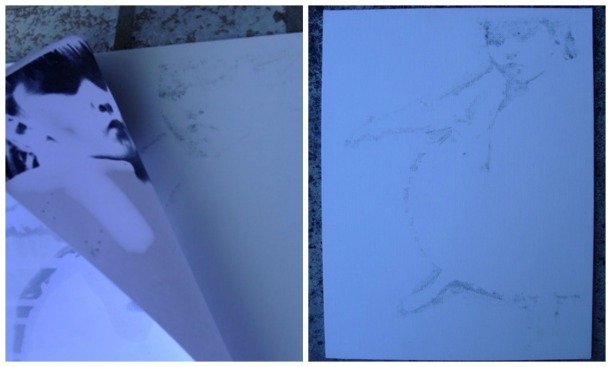 Colour in with oil pastels then thin out with mineral turps for a watercolour effect. You could use linseed oil instead if you desire a less flammable work of art (or work with oil/ acrylic paints.) 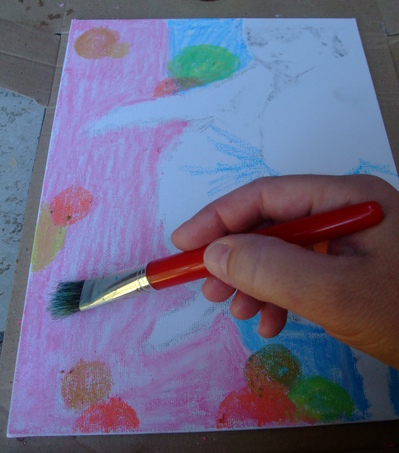 Blu tac to door and feel the love!

Unless you have the tenacity of Sam-I-Am to present and persuade in a many a way… with a goat on a boat, in a box with a fox, in a house with a mouse, on a train in the rain…

maybe just boil them up in green food dye and pop ’em in a spaceship. They’re outta this world!

One toilet roll, a strip of silver crepe paper and a boiled green egg later… 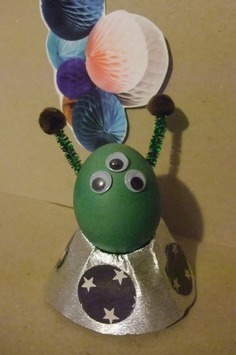 Hiding in the fridge… 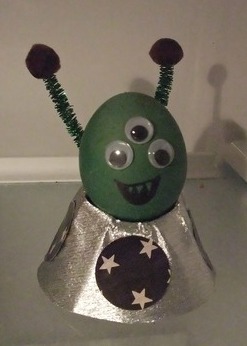 Now how to make vegetables appealing!??

Learning to master the hole puncher! 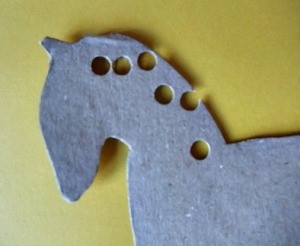 After weeks of painting props and pimping the hills hoist, daughter had her jungle birthday party over the weekend. 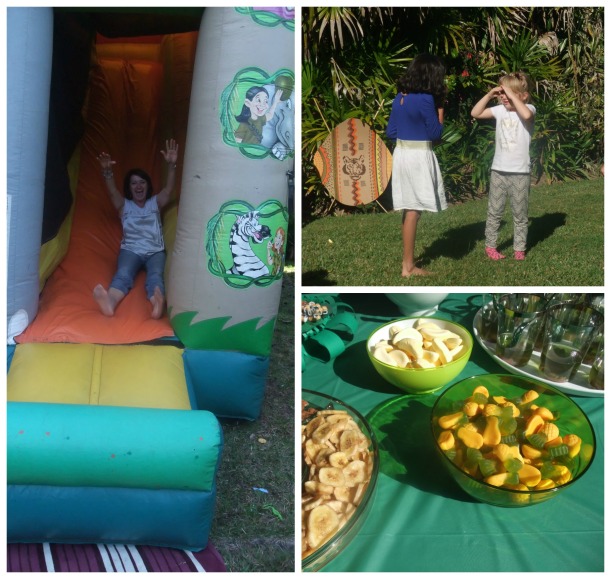 Butterfly pinata and a jungle lady complete with cold blooded creatures that the kids were only too happy to peck, pet and wrap around their necks!

They sat on, pulled out and played with the party props…

carting them home too! 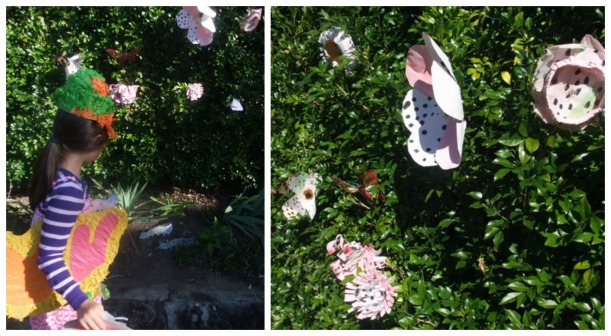